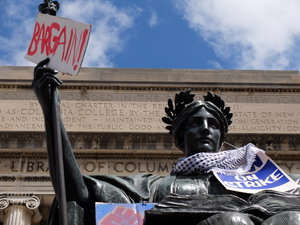 As the Columbia Graduate Workers (GWC-UAW) come to the end of their second week on strike, you can help support them by adding your name to this petition demanding that the University does the right thing by stopping the intimidation tactics, meaningfully engaging in negotiations, and reaching a fair agreement with the student workers union.

"The fact that student workers have to strike to get to a fair contract stands against the values we expect Columbia University to uphold. We are appalled that workers have to strike to establish standard protections in a union contract—real recourse through neutral arbitration, establishing living wages, improving access to healthcare, union security, and securing funding to make up for time lost due to the pandemic.

We also condemn the move to not only dock the biweekly wages of striking workers but also retroactively charge workers for wages they have already received, leading to holds on their accounts that will threaten their student status, which could endanger visa status, if they are unable to pay. We call on you to stop the intimidation tactics of retroactively docking pay of striking workers and to put a fair offer on the bargaining table. Two years is too long and it is time to settle."

With masks on and drums beating, student-workers formed a picket line on Monday at 116th Street and Broadway and along College Walk to mark the fir