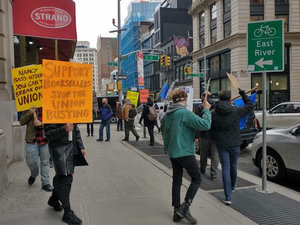 Union booksellers held a rally outside the Strand’s flagship location in New York City on Monday afternoon, protesting the store’s labor practices after a year of worsening relations between employees and owner Nancy Bass Wyden.

In preparation for the holiday rush last year, 38 union workers were rehired by the store, but 31 were subsequently laid off again, according to Melissa Guzy, a Strand bookseller who also serves in leadership of UAW Local 2179, which represents the workers. For some booksellers, this was the third time they were laid off since the Covid-19 pandemic upended the store’s business, which was highly dependent on tourism and foot traffic.

“People are struggling. People are struggling right now,” Guzy said. “They're suffering.” The protest drew more than two dozen booksellers including book workers from nearby Bluestockings Bookstore, Cafe, and Activist Center. Union members allege labor and contract violations by the Strand, including reassignment of union jobs to non-union managers and the outsourcing of web design and e-commerce functions to non-union vendors. Read more here, and click here for info on how to contact Nancy Bass Wyden and tell her how you feel about how the store has been treating its workers!