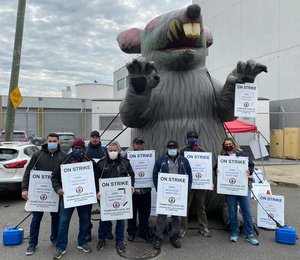 Striking workers at United Metro Energy Corp. (UMEC) rallied Tuesday alongside other Teamster locals for fair wages and benefits. The two dozen essential workers have provided gasoline, diesel, and heating oil to New York throughout the pandemic, despite being paid wages as much as 50% lower than paid at other city oil companies.

“We are here fighting for workers at United Metro Energy to receive the standard wages and benefits for fuel workers in New York City,” said Demos P. Demopoulos, Secretary-Treasurer of Teamsters Local 553. “These workers are standing strong for a fair contract, and they have 120,000 other Teamster members in New York City standing behind them.”

UMEC is owned by billionaire John Catsimatidis. While other unionized fuel terminals in New York City pay good wages and provide quality benefits, UMEC and Catsimatidis have for years undercut those wages and only offered a health plan that is expensive for workers and is not accepted by many doctors. In retaliation for the strike, the company began firing workers, telling them that they are being permanently replaced. Read more about the strike at United Metro Energy here.