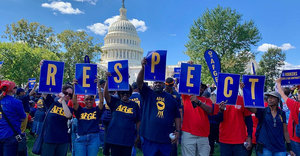 The Environmental Protection Agency (EPA) has signed an agreement with AFGE removing anti-worker provisions from the contract and taking steps to renegotiate a new contract that will be more worker friendly. With the new agreement with AFGE, all language relating to the previous administration’s illegal, anti-union, anti-worker executive orders is gone.

Instead, provisions in the previously ratified 2007 contract between AFGE and EPA will now govern negotiated grievance and arbitration procedures, representational time, union office space, and employee performance evaluations until a new contract is put in place. The 2007 language, for example, allows grievance rights over employee removals and the other issues like ratings, awards, incentives and quality step increases. It allows union reps more time to help members with workplace issues like grievances and health and safety. It also allows locals to use the agency's facilities and resources.

“This is a huge victory for all of the EPA employees that AFGE represents,” said AFGE President Everett Kelley. “This agreement eliminates anti-worker contract provisions that were forced on us by the previous administration and puts us on a path to fully restore all of the workplace rights, protections, and benefits that employees are entitled to.” Read more here.