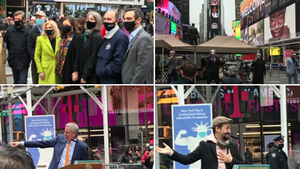 A new dedicated vaccination site in Times Square for film, television, and theater workers is set to help NYC jumpstart our arts and entertainment industry and bring back union jobs. The announcement, which extended the scope of the previously announced dedicated site to include the city’s film and television industries, was made by Mayor de Blasio on Monday, with the NYC CLC, AFM Local 802, SAG-AFTRA, Actors' Equity, IATSE, the Stage Directors and Choreographers Society, elected officials and performers including Lin Manuel Miranda and others all on hand for the event.

Appointments will be available for members of the performing arts & entertainment community who are working, living or attending school in New York City. In addition to the Broadway area vaccination site, the city will use a mobile vaccination unit for Off Broadway theater employees, and will establish pop-up testing sites near Broadway venues. Workers will be able to make appointments through the unions (AFM 802 members click here, others click here). Read more about the announcement here.