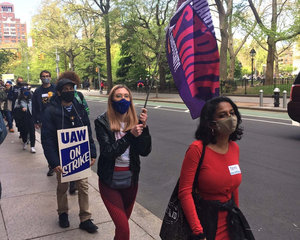 More than 2,200 graduate workers at New York University, members of GSOC-UAW, have been on strike since Monday. The work stoppage began after nine months of stonewalling at the bargaining table by the university administration. The union delivered a petition to NYU at the start of last month, urging management to “take contract negotiations seriously and make meaningful counter-proposals” or face a strike. The school chose a strike.

Bargaining began in August of 2020, and distance between the sides remains: sticking points for the strikers include the administration’s refusal to offer more than a $1-an-hour wage increase and its refusal to bargain over GSOC’s health and safety proposals, which include demands barring NYPD officers’ from entering campus buildings without a warrant and mandating that NYU no longer contract with the NYPD for events. In a letter that went out to some of the strikers’ parents, NYU president Andrew Hamilton calls the strike “unwarranted, untimely and regrettable” and advocates for a mediator to join the process.

Jacobin's Alex N. Press spoke to Dylan Iannitelli, a sixth-year PhD student in the biology department and a GSOC shop steward; Leandra Barrett, a fourth-year PhD candidate in social and cultural analysis and a rank-and-file GSOC member; and Colin Vanderburg, a teaching assistant in the English department and a GSOC bargaining committee member. Read the interviews here, click here to learn more about the strike and how you can help, and follow GSOC-UAW on Twitter for more updates!