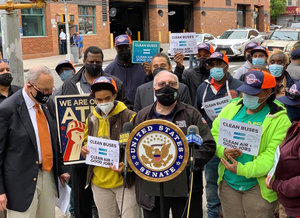 Following the lead set by the Biden administration’s American Jobs Plan, Sen. Chuck Schumer of New York and Sen. Sherrod Brown of Ohio have proposed the Clean Transit for America plan to mitigate climate change, improve air quality, and develop a transit training program for good-paying union jobs. Environmental advocates and unions including Local Union No. 3, IBEW, ATU, and TWU Local 100 joined Sen. Schumer at his press conference outside the Tuskegee Airmen Bus Depot in Harlem on May 4 to publicly announce the plan he is bringing to Congress and the Biden administration.

Currently, only 2 percent of buses nationwide are zero-emission vehicles. The additional $73 billion in the Clean Transit for America Plan would fund the procurement of 155,000 zero-emission buses and vans, the construction of new charging stations, and the renovation of already existing infrastructure such as bus depots. The MTA, to its credit, has already set the goal of a zero-emissions bus fleet by 2040. The additional federal funding proposed by Sen. Schumer and Sen. Brown would make transition upgrades like these feasible in dense cities such as New York.