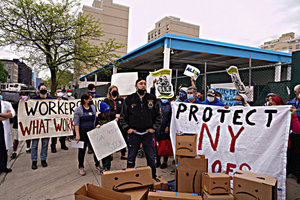 Governor Cuomo this week signed the NY HERO Act, giving an array of essential workers in New York new on-the-job protections. The bill, which was sponsored by state Sen. Michael Gianaris (D-Queens) and Assemblywoman Karines Reyes (D-Bronx) and passed in the Legislature last month, directs the Department of Labor to issue airborne infectious disease standards for businesses that will include protocols on testing, face masks, personal protective equipment, social distancing and other measures, and calls for fines against businesses that fail to adopt and enact new standards to protect workers. The standards will be crafted by industry-specific worker committees, and the bill also includes strong anti-retaliation provisions that allow workers to call out employers without fear of reprisal.
The Act was signed into law despite extensive corporate lobbying thanks in part to the efforts and labor and community activists, including members of the Committee of Interns and Residents/SEIU who not only attended virtual press conferences, spoke at rallies, and lent their voices to calls to protect workers in the state—they also produced videos in support of the legislation. Check out a compilation of their videos here, and read more in AMNY.