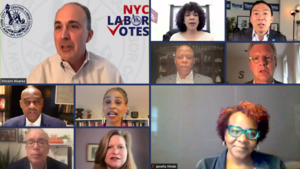 On Wednesday and Thursday nights, eight of New York's leading Mayoral candidates participated in a virtual "Conversation with the Candidates" to make their cases before New York City's labor movement. Nearly 600 union officers, their delegates, and activists tuned in to the NYC CLC's two-day 2021 Mayoral Forum, together representing one million registered voter households in the City. The vast majority of those households, about 700,000, are eligible to vote in the June Democratic primary. Those who participated were empowered by their unions, many of which have not yet made endorsements, to go back to their leaderships and memberships to share what they heard.

Candidates Eric Adams, Shaun Donovan, Kathryn Garcia, Ray McGuire, Dianne Morales, Scott Stringer, Maya Wiley, and Andrew Yang addressed questions submitted from every corner of New York’s labor movement, including questions about the city’s recovery from the economic crisis brought on by COVID as well as other issues of critical concern to working families. The forum was part of a Labor Votes! series of events taking place throughout the 2021 election cycle in NYC to educate, engage and activate members of union households.

With such a huge turnover of representation in elected positions throughout the city, it is critical we elect public servants who will put working families first. And you can help us reach union members and their households to ensure they know when, where, and now with the process of ranked-choice voting, how to vote in the upcoming elections. For more information, please visit laborvotes.nyc and click here to sign up to volunteer today!