"We Are the Met": Opera Unions Rally Against Union Busting 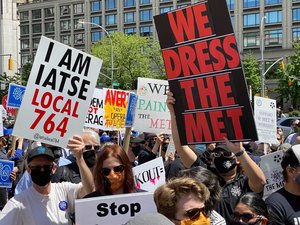 Hundreds of union members and supporters rallied yesterday in front of Lincoln Center Plaza to reject the union busting tactics of Metropolitan Opera House General Manager Peter Gelb and the Metropolitan Opera House Association and demand a fair contract for all Met artists. Members of IATSE Locals One (Stagehands), 764 (Wardrobe), 751 (Treasurers and Ticket Sellers), 794 (Television Broadcast Studio Employees, 798 (Makeup Artists and Hair Stylists), and 829 (Scenic Artists), AFM Local 802, Theatrical Teamsters Local 817 AGMA, Theatrical Teamsters Local 817, and 32BJ were joined by fellow union members, the NYC Central Labor Council, the NYS AFL-CIO and many elected officials in opposition to the months-long lockout of the Met's stagehands and the Met's attempt to exploit the pandemic to impose draconian paycuts on its employees, many of which would remain "in perpetuity" long after the current crisis ends.

“That’s not the Met Opera,” said James J. Claffey Jr., president of IATSE Local One, pointing at the building. “The greatest stage, the largest stage — it’s empty. It’s nothing without the people that are right in front of me right now.”

"Broadway is selling tickets, the Philharmonic is doing performances. They're building stages right before our eyes," said Adam Krauthamer, President of American Federation of Musicians Local 802, whose members are fighting for a fair contract after watching their work being outsourced during the pandemic. "The only person who doesn't see that his job is to reopen the arts is Peter Gelb."

Click here to watch the full rally, read more in the New York Times, and check out additional pictures and videos using the hashtag #WeAreTheMET.