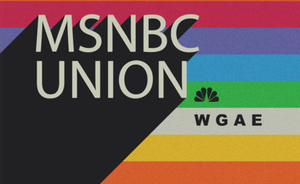 The newsroom employees at MSNBC and The Choice on Peacock yesterday announced that they have unionized with the Writers Guild of America, East (WGAE) for the purpose of collective bargaining. The 315-member bargaining unit includes writers, producers, booking producers, fact checkers, and planners at every program airing on MSNBC and The Choice on Peacock. A clear majority of staff signed a letter to management calling for voluntary recognition of the union.

"An overwhelming majority of our coworkers at MSNBC have signed a petition for union recognition to join over 7,000 members of the WGAE, which includes thousands of journalists working in cable, broadcast, and digital media," the bargaining unit said in a statement. "At a time when journalists and journalism itself are under siege, we want to join our peers who have paved the road before us in standing up for our rights. We are calling on the network to recognize our union and we are looking forward to constructive negotiations over the issues that are important to all of us."

The network, known for its progressive politics, responded to the announcement by saying it won’t recognize the effort until a majority of workers vote in a secret ballot election. Read more in the NY Times, and follow the new MSNBC Union on Twitter!