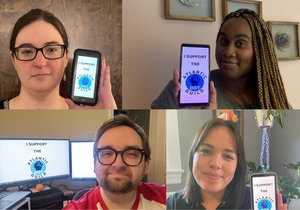 The NewsGuild of New York has filed an Unfair Labor Practice charge with the NLRB after Gannett managers offered employees benefits in exchange for rejecting the union and created the impression that management was spying on workers’ protected union activities.

Digital producers at the Atlantic Digital Optimization Team (DOT) work across a five-state region that produces 37 websites in New York, New Jersey, Pennsylvania, Delaware and Maryland. They announced they are forming a union with the NewsGuild of New York, CWA Local 31003 in early June. Gannett declined to voluntarily recognize the union, even though a supermajority of workers signed membership cards as well as a Mission Statement supporting the union. An NLRB mail-in ballot union election is now scheduled to commence on July 7.

The complaint, filed Wednesday, deals with multiple violations of the National Labor Relations Act. Charges include that Gannett management promised benefits for rejecting the union and prohibited discussion of the union on work time, even though staff are permitted to discuss other non-work issues during their workday.

“Management should do the right thing for their workers, stop union busting and agree to voluntarily recognize the union,” said Susan DeCarava, President of the NewsGuild of New York. “Whether it be at Gannett, The New York Times, or anywhere else, we will protect the right of workers to organize without interference from union-busting managers.” Read more here!