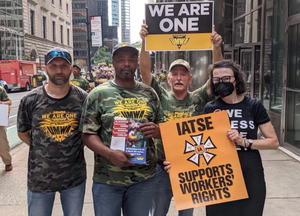 More than a thousand coal miners at Warrior Met Coal are now in the third month of their strike in the right-to-work state of Alabama. The miners walked off the job on April 1 after their union, the United Mine Workers of America, called the first strike to hit the state’s coal mining industry in four decades. Workers are fighting for improvements to wages and benefits after they agreed to drastic cutbacks in 2016, when Warrior Met Coal took control of the mines after the previous company went bankrupt. On Tuesday, a group of striking mine workers traveled from Alabama to Wall Street and were joined by NYC-based union members and supporters to protest the investment firms backing Warrior Met—BlackRock Fund Advisors, State Street Global Advisors, and Renaissance Technologies.

“These are the companies that fund Warrior Met and allow Warrior Met to pay their executives millions of dollars a year, while the miners, the workers themselves who are creating that value, are struggling to get by on sometimes as little as $22 an hour,” said labor journalist and organizer Kim Kelly. Watch Kim's reporting on the strike and Tuesday's protest on Democracy Now!

Striking Mineworkers and Supporters Bring Their Fight Back to NYC