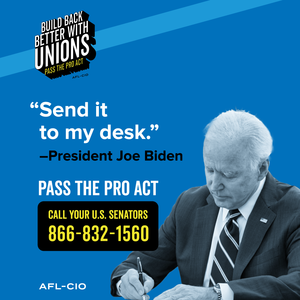 Faith activists recently delivered a letter to all 50 U.S. Senators calling on them to pass the PRO Act, making it easier for workers to form a union. The letter, signed by 400 faith leaders nationwide representing dozens of denominations and traditions, urges Senators to pass the Act and protect the dignity of workers.

“Because we believe in the sacred worth of both work and workers, we support the “Protecting the Right to Organize (PRO)” Act, which will strengthen and expand the right of workers to form unions, bargain collectively, and engage in collective action without fear of retaliation by their employers,” the letter states. Read more here!

It's not too late to get in on the action! Here in New York State, our Senators are already supporters. But we can still ask family and friends in other states—especially Alaska, Arizona and Virginia—to call their Senators and ask for their support! Let’s show the Senate that people are pro-union across the country and across party lines.