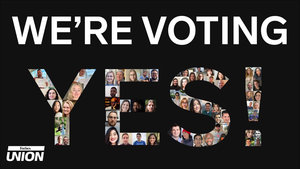 Editorial employees at Forbes voted 67-7 to be represented by The NewsGuild of New York, TNG-CWA Local 31003 in a National Labor Relations Board election that concluded Tuesday. The more than 100-person bargaining unit includes reporters, editors, designers, videographers and social media editors.

On May 18, the Forbes Union had announced that more than 80% of the editorial staff had signed union authorization cards, requesting voluntary recognition from Forbes management. Members filed for an election with the National Labor Relations Board on May 24 after the company refused to recognize the union. The mail-ballot vote was held from June 29 to July 20.

“After months of organizing, we're proud of our newsroom for coming together to make Forbes a fairer and more secure workplace for staffers at all levels,” said Rachel Sandler, a wealth reporter at Forbes. “We're excited to move forward as a unit to address diversity, pay equity, editorial integrity and much more at the bargaining table.” Read more here!

We are the Forbes Union.