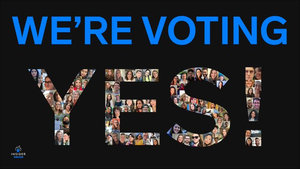 The Insider Union announced publicly on April 19 that more than 80% of the editorial staff had signed union authorization cards and requested voluntary recognition from Insider management. The company refused to recognize the union, prompting the NewsGuild to file for an election with the National Labor Relations Board.

"We’ve been organizing and fighting for over a year now. We’re ready to win this election and celebrate with our unit — and then get back to business at the bargaining table," said William Antonelli, an editor at Insider. Read more here!