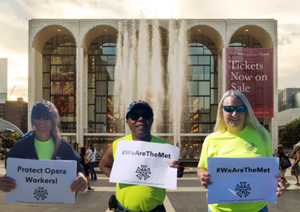 After nearly round-the-clock negotiations at the end of June that lasted into the July 4th holiday weekend, negotiators for the International Alliance of Theatrical Stage Employees Local One (stage and shop crew members) and the Metropolitan Opera have reached a tentative agreement for a new contract. Full details of the agreement will be released after members of IATSE Local One review the contract and vote on ratification on July 18.

“Getting to this point required overcoming hard feelings due to the lockout of our members and crafting some innovative solutions,” said IATSE Local One President James J. Claffey Jr. “We were coming down to the wire. If talks had dragged on any longer it may have been impossible to prepare the opera house for a September opening. This agreement makes it possible for the 2021-2022 opera season to begin as scheduled.”

“It would have been a new kind of opera tragedy if the Met remained closed,” said IATSE International President Matthew D. Loeb. “But we’re not done yet. Our union has many members at the Met beyond those represented by Local One. We need to make sure that their contracts are settled and their issues are addressed.” Read more here!