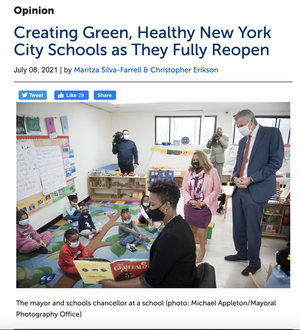 "In New York City, the clean energy economy of the future should not be driven by short-term, low-skill, dead-end jobs," write Local 3, IBEW Business Manager Christopher Erikson and ALIGN NY Executive Director Maritza Silva-Farrell, leaders in the Climate Works for All coalition. "Instead, it should be full of good-paying, union jobs with family supporting wages and benefits." Read the full op-ed in the Gotham Gazette.

The Climate Works for All coalition of labor unions, environmental justice advocates, and community groups has released a report, “Creating Green, Healthy Schools,” and a plan to replicate the success of the net-zero P.S. 62 on Staten Island at every public school building in the five boroughs. CW4A calculates that $1.5 billion is needed to install solar and HVAC systems in every public school in NYC. The Department of Citywide Administrative Services currently has $3.8 billion in funding for city energy efficiency upgrades.

Join us in demanding our current mayor and the next administration to stand up for our communities by building Green, Healthy Schools now! Sign the petition.