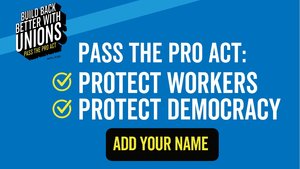 Sens. Chuck Schumer and Kirsten Gillibrand took part in a press conference on Sunday, kicking off a Labor Week of Action by pushing for passage of the Protecting the Right to Organize (PRO) Act. They were joined by Stuart Appelbaum, President of the Retail, Wholesale and Department Store Union (RWDSU) and Executive Vice President of the United Food and Commercial Workers International Union (UFCW), and Mario Cilento, President of the New York State AFL-CIO. Read more about the event in AMNY!

Our outdated labor laws are no longer strong enough to protect us in the workplace. High-profile corporations openly union-bust without facing consequences. Anti-worker lawmakers have passed wage-killing and racist right to work laws in 27 states. Inequality has skyrocketed as workers have been denied a voice on the job.

The PRO Act would change that. It’s the most significant worker empowerment legislation since the Great Depression. And it’s also a civil rights and economic stimulus bill. If we can get this passed, working people will thrive for generations to come. It passed the House with bipartisan support last spring, and President Biden has urged Congress to send it to his desk. The Senate is the final obstacle.

It's not too late to get in on the action! Here in New York State, our Senators are already supporters. But we can still ask family and friends in other states—especially Alaska, Arizona and Virginia—to call their Senators and ask for their support! Let’s show the Senate that people are pro-union across the country and across party lines.