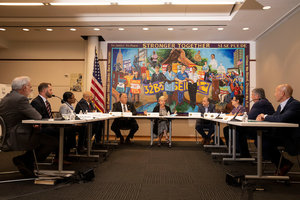 Secretary Granholm opened the event with remarks about the importance of creating high-quality, high-paying union jobs through public investments in climate infrastructure, highlighting the Biden administration’s infrastructure plan. Participants talked about the value of having labor driving bold climate action while ensuring that the new clean energy economy is built with good union jobs, noting that New York is leading the way by investing in large-scale offshore wind infrastructure with high-road labor standards. They highlighted the opportunity to make schools carbon-free, healthier, and safer while creating good union jobs and saving schools millions in energy costs, one of CJNY’s active campaigns. And they emphasized the importance of a just transition for communities that currently rely on fossil fuel industries, as well as promoting access to good jobs and careers for frontline and disadvantaged communities. Video of the full event is available on YouTube.

“We were honored to meet with Sec. Jennifer Granholm today to discuss Climate Jobs New York’s vision for a worker-centered, renewable energy economy for our state and beyond," said CLC President Alvarez. "Climate breakdown, income inequality, and racial injustice are urgent issues, and the labor movement in New York is coming together to advance concrete plans to tackle these interrelated crises. Our roundtable discussion today demonstrates the transformational potential that working people and their unions wield when we lead on climate policy, and we look forward to the New York labor movement's participation with Sec. Granholm to build back better by creating millions of family-sustaining climate jobs with strong labor standards in communities that need them most.” Read more about Sec. Granholm's visit in Crain's New York.