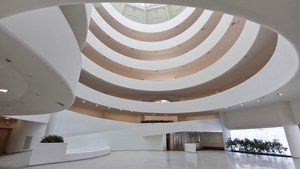 On Friday, curators, conservators, editors and other employees at the Guggenheim Museum filed to form a union with the Technical, Office and Professional Union, Local 2110. It will be the second union to form at the museum in two years, since art handlers, maintenance mechanics and other Guggenheim employees voted to join Local 30 of the International Union of Operating Engineers in 2019.

Although there had been discussion for years among Guggenheim employees about forming a collective bargaining unit that would represent its professional staff, employees said there was a renewed push during the pandemic.

“Unionizing is becoming more and more common, especially within our field,” said Julie K. Smitka, a digital associate producer at the Guggenheim who has taken part in the organizing efforts there. “At a lot of institutions during the pandemic there were furloughs and layoffs and I think that got the gears turning about what a union could do for us.”

Another Guggenheim worker, Rosemary Taylor, said that "racial equity and diversity” and transparency in decision-making were also important issues, adding that many employees wanted to know more about what museum officials were planning and have a chance to speak up about matters that affect them.

“We want to have a voice,” she said. “We want to make the jobs that we love better so we can keep doing them.” Read more in the NY Times.