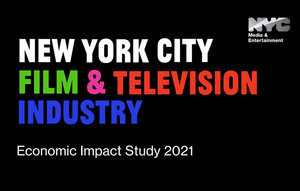 The Mayor's Office of Media and Entertainment (MOME) this week released the NYC Film and Television Industry Economic Impact Study 2021, detailing specifics on the film and television industry's significance and contribution to New York City's economy. In 2019, the industry supported in total approximately 185,000 jobs, $18.1 billion in wages, and $81.6 billion in total economic output. The groundbreaking report arrives as New York City begins to recover from the pandemic, which highlighted just how important this industry is to the city's identity, the livelihood of many New Yorkers, and the local economy.

"The Impact Study confirms what SAG-AFTRA and the entertainment unions have known for many years; our industries are a vital part of the NYC economy," said Rebecca Damon, SAG-AFTRA Executive Vice President and New York President. "The film, television and broadcast industries create and sustain strong union jobs and will lead the way as the City comes roaring back from the pandemic. It's an exciting time to live and work in New York and SAG-AFTRA members are eager to play a large part in our city's recovery. We look forward to working with the MOME, our fellow unions, and our industry partners to keep NYC at the forefront of the digital entertainment and media revolution."

"MOME's report on the NYC Film and Television sector's growth in economic impact and jobs directly correlates to Theatrical Teamsters Local 817's experience these past 15 years," said Thomas J. O'Donnell, President, Theatrical Teamsters Local 817. "Correctly, the report credits much of the success to the New York State Film tax credit program allowing producers to take advantage of the City's iconic locations, extensive infrastructure, and world class talent & crews. While membership suffered OVER a 95% job loss by the 2nd quarter of 2020, we are now approaching pre-pandemic employment levels. Like the city we live and work in, our crews have remained tough, resilient, and optimistic in the future." Read more here.