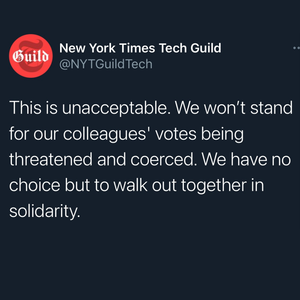 New York Times tech employees walked off the job on Wednesday in a half day work stoppage to protest the publisher's aggressive union busting efforts. Workers planned the action on Monday, after learning that Times management is asking the NLRB to exclude staff such as data analysts and designers from an upcoming vote on unionization.

The tech workers announced in April that they are seeking to join the NewsGuild of New York, and 70% have signed a petition pledging to vote for the union. The Guild currently represents 1,300 editorial and business employees at the Times, and would represent 600 additional members with a successful union vote. But management is asking the NLRB to restrict the vote to software engineers only, which would shrink the potential bargaining unit by more than a third.

"Times management just took the legal position that over 230 of our coworkers don’t deserve a vote in our election as they are not product engineers," said the New York Times Tech Guild on Twitter. "We're disappointed that so many of our colleagues are being subjected to this disenfranchisement. Mgmt falsely claims that our groups do not share a community of interest. Yet, they repeatedly emphasize the importance of our cross functional work in the success of our products. That’s why we have united together as one union, The Times Tech Guild! By taking such an adversarial stance, management is forcing this process to go to hearings, which will delay us by months before we can cast our union votes. But they still have time to reverse this decision and do the right thing. We urge them to come to the table and do so."

Yesterday, news came that the law firm representing the paper’s management accidentally sent a private strategy memo to NewsGuild of NY staff, so click here for a glimpse at how employers work to undermine union campaigns. Read more about the walkout here, and follow @NYTGuildTech here!