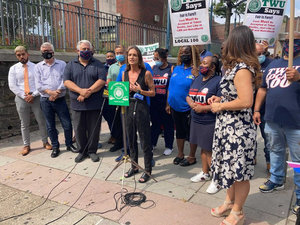 TWU Local 100 and state lawmakers demanded Tuesday that the MTA resume cash transactions at subway token booths, saying the no-cash policy started during the pandemic discriminates against low-income New Yorkers. They gathered outside Broadway Junction subway station in East New York to demand the agency immediately resume the hand-to-hand transactions, which ended in March 2020 out of concerns over the coronavirus.

A group of 42 lawmakers sent a letter to former Metropolitan Transportation Authority chairman Pat Foye blasting the lack of cash exchanges in June, but the agency has said it has no plans to resume token booth cash transactions.

Transport Workers Union Local 100 president Tony Utano said the move was an unfair attack on union members, and questioned why the MTA’s higher-income riders in the suburbs are still allowed to pay with cash.

“They restore cash on the LIRR and Metro-North, but they don’t restore cash in the city,” said Utano. “We’re not opposed to negotiating something. But we’ve got to get the cash back into the booth right now.”

“How can we tell people to take the trains and take away the means for them to get on the train?” said State Sen. Zellnor Myrie, pointing out that the no-cash policy discriminates against New Yorkers who have no choice but to use mass transit. Read more in the Daily News and watch a WPIX report on why New Yorkers need the option of cash transactions here.