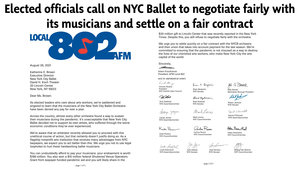 AFM Local 802 President Adam Krauthamer and sixteen elected officials from across New York have called on the New York City Ballet to negotiate with its musicians and settle on a fair contract. The letter (download a PDF here), addressed to NYC Ballet Executive Director Katherine E. Brown, stated in part:

"As elected officials who care about arts workers, we’re saddened and angered to learn that the musicians of the New York City Ballet Orchestra have been denied any pay for over a year [...] You can undoubtedly afford to pay your musicians: your endowment is worth $198 million. You also won a $10 million federal Shuttered Venue Operators Grant from taxpayer-funded pandemic aid and you will likely share in the $20 million gift to Lincoln Center that was recently reported in the New York Times. Despite this, you still refuse to negotiate fairly with the orchestra.

"We urge you to settle quickly on a fair contract with the NYCB orchestra and their union that takes into account payment for the last season. We’re committed to ensuring that the pandemic is not misused as a way to destroy the lives of our cherished arts workers, who make New York City the arts capital of the world."