Honor Workers by Fighting for Their Rights 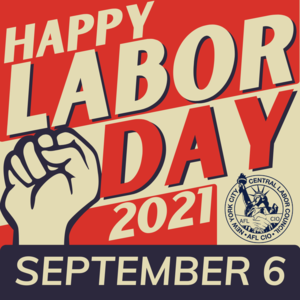 Today, we observe Labor Day by recognizing all working people for their contributions to our nation and giving them a chance to enjoy a well-earned rest and time with their loved ones. This year’s observance is particularly meaningful, as we express our gratitude for the frontline and essential workers who have worked tirelessly for their fellow New Yorkers, and honor the memories of working people who tragically lost their lives 20 years ago on September 11th.

More than 600 of those who died as a direct result of the attacks on September 11th were members of New York City unions. In addition to the first responders who lost their lives, these included restaurant workers, communications workers, building trades workers and others in the World Trade Center and surrounding areas.

In the months that followed, workers from all walks of life and nearly fifty unions showed up to help, moving people to and from affected areas, building lighting structures to assist in rescue operations, cleaning up wreckage, rebuilding communications systems, and more. Many who answered the call have since developed chronic health conditions or died of illnesses caused by exposure to WTC contaminants.

Twenty years later, as we begin to emerge from a new and very different crisis, we’ve seen once again working people serving as the backbone of our society. Throughout the pandemic, essential workers have consistently put their own health and safety on the line. Thankfully, unionized workers have been able to use their collective voice in the workplace to secure enhanced safety measures, paid sick time, hazard pay, and negotiate furloughs or work-sharing structures in order to preserve jobs.

But the crisis has also exposed serious issues of inequality, particularly non-union workers facing significant consequences including inadequate healthcare and workplace protections. Women workers in particular have shouldered the majority of family caregiving responsibilities, often being forced to reduce their hours or leave the workforce entirely.

These workplace issues didn’t begin with COVID. For decades, the right to organize has been under attack as bosses exploit weaknesses in existing labor laws to undermine worker rights. As a result, income inequality has skyrocketed, with CEO compensation rising more than 1300 percent since 1978, compared to a paltry 18 percent increase in typical worker pay.

Fortunately, we have the opportunity to pass the Protecting the Right to Organize (PRO) Act, a once-in-a-generation piece of federal legislation that will take on runaway economic inequality by leveling the playing field for workers, giving them back a voice in the workplace and in their own futures. In doing so, we’ll help our economy, raise the floor for all workers, and ensure better, safer working conditions. So, as we take time this week to reflect on what working people have done for New York City, the sacrifices they’ve made and continue to make, let’s honor them by continuing our fight for rights and protections for all workers.

Approval of Labor Unions at Highest Point Since 1965

According to a new Gallup poll released this week, 68% percent of Americans approve of labor unions.