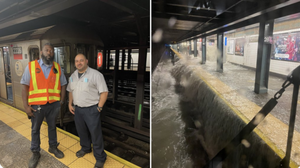 t takes a team. That’s the anti-OPTO (One-Person Train Operation) message TWU Local 100 shared with media and elected officials during the recent subway power outage and the incredible flooding that came days later. In both emergencies, Local 100 Conductors and Train Operators urged riders to remain calm as they orchestrated train evacuations in these very difficult circumstances.

“It takes a team on the train during emergencies like this,” TWU Local 100 President Tony Utano said. “Conductors and train operators across the system used their training, worked together, and evacuated passengers quickly and safely. The power outage and the flash flood clearly demonstrate why you need Conductors and Train Operators on board - no matter how much new technology is added to the system.”