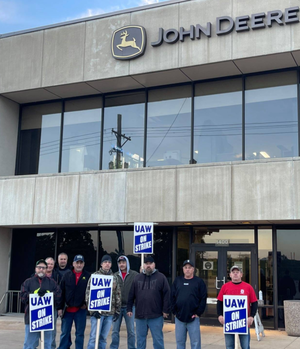 More than 10,000 UAW John Deere members struck at midnight on Thursday after the company failed to present an agreement that met members’ demands and needs, in what's currently the largest private sector strike in the U.S. in two years. The workers, who are spread out across 14 facilities primarily in Iowa and Illinois, rejected a management offer that would increase wages by only 12% over six years and eliminate the pension system for new hires. Meanwhile, John Deere’s earnings soared to a record $1.79 billion in the second quarter of 2021, nearly double last year’s profits. Its CEO's pay increased by 160% in 2020. (Photo via UAW Local 838)

“Our members at John Deere strike for the ability to earn a decent living, retire with dignity and establish fair work rules,” said Chuck Browning, Vice President and director of the UAW’s Agricultural Implement Department. “We stay committed to bargaining until our members’ goals are achieved.”

AFL-CIO President Liz Shuler joined CNN this week to talk about how John Deere workers and other workers are standing up for a better deal and a better life through strikes across the country-- click here to watch.