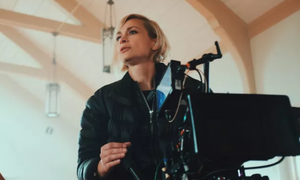 Cinematographer and IATSE Local 600 member Halyna Hutchins’s death during the filming of Rust is a tragic consequence of studios prioritizing profit and speed over crew members’ lives, writes Alex N. Press in a Jacobin article that details the safety issues and labor strife that preceded last week's fatal shooting.

“This situation became deadly because a gun was involved, but these labor issues are constant and ongoing," one crew member told Press. "We’re seeing crew members who are dying after leaving work and driving home on long days. Producers don’t care. They will replace you the next day and keep moving. They will burn down the entire village to get their thing done, and leave it smoldering behind them.”

"Yesterday's set incident was a tragedy and a heartbreaking example of why production companies MUST take the safety & protection of our filmmakers more seriously," said AFL-CIO President Liz Shuler. "No capital, product or profit should ever—ever—come at the expense of somebody's life. " Click here to read the AFL-CIO's most recent "Death on the Job: The Toll of Neglect" report on the state of safety and health protections for America’s workers.

IATSE Local 600 has set up a GoFundMe for Halyna's family here.