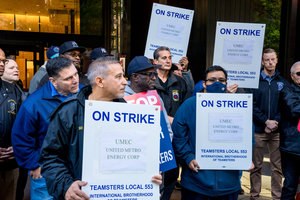 New York oil workers fired by John Catsimatidis in retaliation for their strike for equal pay rallied Tuesday alongside local elected officials, Teamsters, and other union supporters outside the billionaire’s Midtown office. Workers from the Catsimatidis-owned United Metro Energy Corp. (UMEC) commemorated the six month anniversary of their strike, which began on April 19th. The immigrant workers provided gasoline, diesel, and heating oil to New York throughout the pandemic, while Catsimatidis — a major political donor — paid them wages as much as 50% lower than at other city oil companies.

The company has sent letters to eight workers over the course of the strike telling them that they have been “permanently replaced.” The firings have illegally targeted union activists. The National Labor Relations Board is currently investigating charges relating to the firings.

UMEC terminal workers, fleet mechanics, and service technicians voted to join Teamsters Local 553 in February 2019, but Catsimatidis dragged out negotiations for a first contract for two years, precipitating the strike. While other unionized fuel terminals in New York City pay good wages and provide quality benefits, UMEC has for years undercut those wages and only offered an expensive health plan that is not accepted by many doctors.