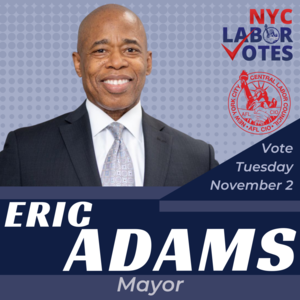 The NYC CLC, representing 300 unions and 1.3 million members including more than one million registered voter households across New York City, completed its 2021 endorsement process this week with a final round of endorsements in Citywide General Election races, including Eric Adams for New York City Mayor.

“Eric Adams has long been a champion of working people in New York City, and we know that he has what it takes to work with us to revive our city’s hard-hit industries, protect jobs and critical city services, and build a resilient economy that works for all working people,” said NYC CLC President Vincent Alvarez.

“As the largest and broadest labor coalition in the city, we’ll continue to engage more than a million voting households through our member-to-member outreach in support of these candidates as Election Day approaches,” said Alvarez. “We look forward to building on our relationship with Public Advocate Jumaane Williams, and to partnering with Brad Lander as Comptroller to advance policies that protect the interests and livelihoods of New York City’s workers.”

More than 200 candidates sought the CLC’s endorsement in 2021, participating in a rigorous process that began with a training on the New York City labor movement and the issues important to working people. Candidates also interviewed with a panel of affiliate representatives and completed an extensive questionnaire before they were considered eligible for endorsement. A full list of 2021 CLC endorsements is available here.