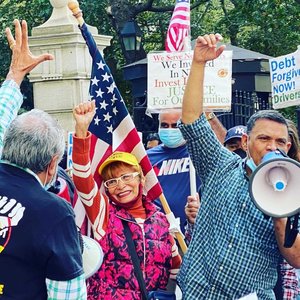 The New York Taxi Workers Alliance has entered its second week of a hunger strike, calling for a City-backed guarantee to New York City’s Medallion Relief Program. Thousands of taxi medallion owner-drivers are trapped in lifelong debt for medallions that are worth a fraction of what they cost. A New York City Council investigation has found that the City of New York played a direct role in inflating the value of the medallion. Between 2002 and 2014, the City earned more than $855 million from medallion sales. Today, a workforce composed almost entirely of immigrants is left holding the debt while the City retains the gains.

These workers have now taken the extraordinary step of starting a hunger strike to demand a just resolution to the financial and humanitarian crisis they are facing. These workers have put in decades of work behind the wheel and many rightly expected to begin a dignified retirement today. Many in the NYC labor movement including the NYC CLC have added their voices to those calling on Mayor de Blasio for a City-backed guarantee to the existing debt relief plan, which would ensure affordable payment terms for drivers while enabling them to still earn a living wage. Learn more about the Medallion Debt Forgiveness Campaign and how you can support it here.