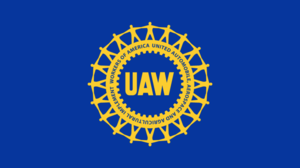 UAW members mourned the death this week of Richard Rich, a 56-year-old member of Milan, Ill, Local 79, who was a 15-year employee at the Milan John Deere Parts Distribution Plant in Moline, Ill. He was struck in a traffic accident and fatally injured while walking to the picket line.

“On behalf of the UAW and all working families, we mourn the passing of our UAW brother,” said Ray Curry, UAW President. “It is a somber time to lose a member who made the ultimate sacrifice in reporting to picket for a better life for his family and coworkers.” Read more here.

More than 10,000 UAW John Deere members have been on strike since October 14th after the company failed to present an agreement that met members’ demands and needs, in what's currently the largest private sector strike in the U.S. in two years. The workers, who are spread out across 14 facilities primarily in Iowa and Illinois, rejected a management offer that would increase wages by only 12% over six years and eliminate the pension system for new hires. Meanwhile, John Deere’s earnings soared to a record $1.79 billion in the second quarter of 2021, nearly double last year’s profits. Its CEO's pay increased by 160% in 2020.

A relief fund has been set up to support striking workers—click here to contribute.