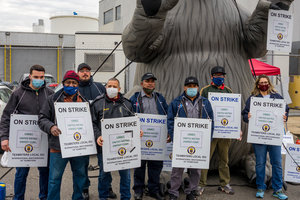 This week, the New York Daily News reported that billionaire John Catsimatidis is flouting labor law by underpaying oil truck drivers delivering heating oil to public schools and other city buildings, based on a compliant filed with the New York City Comptroller.

United Metro Energy Corp. has received over $100 million in City contracts, but records provided by Teamsters Local 553 show that the company has not followed prevailing wage law that requires fair wages and benefits be provided to the workers making deliveries.

“I was getting underpaid ... and at the same time the company is making a lot of money,” Tushar Amin, a driver who’s worked for the company since 2005, told the Daily News. The news comes amid a seven-month strike by workers at the United Metro Energy oil terminal in Brooklyn, who are seeking their first union contract and equal pay with other workers in their industry. Read the Daily News investigation here.