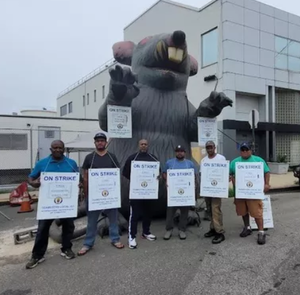 Workers at billionaire John Catsimatidis's United Metro Energy Corp have been on strike since April 19th. The immigrant workers provided gasoline, diesel, and heating oil to New York throughout the pandemic, while Catsimatidis — a major political donor — paid them wages as much as 50% lower than at other city oil companies. UMEC terminal workers, fleet mechanics, and service technicians voted to join Teamsters Local 553 in February 2019, but Catsimatidis dragged out negotiations for a first contract for two years, precipitating the strike.

A GoFundMe has been established to help the 14 striking workers and their families as we head into the holiday season. Any contribution will help them continue to fight for their families and provide essentials such as food clothes and travel expenses. Your support is appreciated — click here to make a contribution!