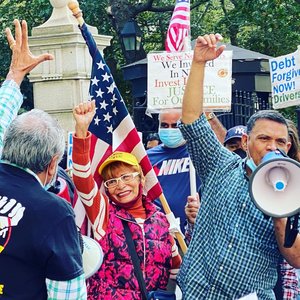 New York City taxi workers this week reached a historic debt relief agreement with New York City and a private asset management company after more than a month of protests and fifteen days of a hunger strike calling on the City to to do more to help resolve the financial and humanitarian crisis that has plagued taxi medallion owner-drivers.

Under the agreement, the private equity firm that is the largest holder of medallion loans will restructure the loans to a maximum of $200,000, which will then be cut to $170,000 with a City grant of $30,000. The interest rate will be capped at 5% over a 20-year term, which will amount to monthly payments of $1,122, allowing the drivers to work and make a living wage. And critically, the City has agreed to guarantee the loans in the event of a default.

“I couldn’t be happier right now,” said one of the hunger strikers, Augustine Tang, 37, a driver from Brooklyn told THE CITY. “I’m so relieved. We didn’t ever think it would get to this point. What people don’t really see is that we have been here for years. We’ve been protesting for so many years.”

The agreement, which was announced by Senator Chuck Schumer and Mayor Bill de Blasio, came one day after more than twenty New York City unions and labor organizations, including the New York City Central Labor Council, wrote to the Mayor expressing support for the New York Taxi Workers Alliance's proposed plan. Read more about the workers' historic victory in THE CITY, The New York Times, Mother Jones, AMNY, and Gothamist.