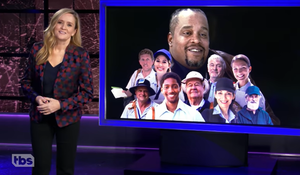 New York Metro Area Postal Union, APWU President Jonathan Smith sat down with Samantha Bee on this week's episode of Full Frontal to talk about how Postmaster General Louis DeJoy is trying to sabotage not only the Postal Service, but people's confidence in the Postal Service, with the largest rollback of consumer mail services in a generation.

In the segment, President Smith explains who suffers as a result of postal slowdowns: "The elderly person who's not computer literate. That small business owner that cannot compete with these large conglomerates. Those soldiers overseas that need to get a word from home."

President Biden doesn't have the power to remove DeJoy, because that power is vested in the Board of Governors. What the President can do is nominate someone new to replace Board Chair Ron Bloom, a supporter of DeJoy whose firm helped privatize the UK's postal service, before his term is up on December 8. You can help by calling President Biden at 202-456-1111 between the hours of 11am and 3pm to tell him that Ron Bloom has got to go!

"We do not deliver Republican mail. We do not deliver Democratic mail. What we deliver is America's mail," said President Smith. Watch the full segment here and read AV Club's piece on it here.

We Need to Save the Postal Service--Here is How We Do It!
Sam Bee delivers the message that December 8 is the deadline to junk Postmaster Louis DeJoy