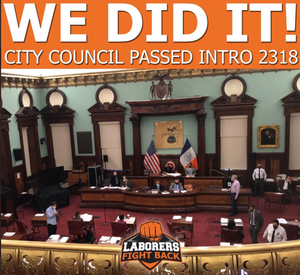 On Wednesday, the New York City Council passed a groundbreaking law regulating construction industry body shops, which prey on people returning home from incarceration and leverage workers' parole mandates of maintaining employment as a condition of their release. These body shops take advantage of the scarcity of job opportunities available to formerly incarcerated New Yorkers, who are told that in order to survive life after prison, they must accept dangerous, low-wage construction jobs.

Intro 2318, sponsored by Councilmember Diana Ayala, provides a regulatory framework and increases transparency of how body shops operate. This bill distinguishes between legitimate subcontractors (who assume risk when they bid on a project) and body shops, who supply laborers (often formerly incarcerated) and charge the general contractor or owner a premium for their work.

“I’m glad the City Council has listened to the stories and struggles of formerly incarcerated workers like me,” said Laborers Local 79 member John Simmons, a former body-shop worker who was active in the union’s campaign for the bill, Laborers Fight Back. “For too long the body-shop system of exploitation has operated in the shadows, on construction sites throughout our city. For too long, we’ve been told that any job, no matter how unsafe and poorly paid, is better than no job. No more.”