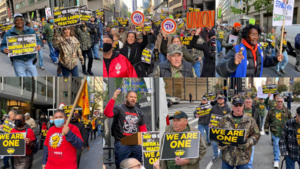 More than 500 Warrior Met Mineworkers brought their picket line from Alabama to Manhattan this week, and the New York City Labor Movement was out in force to welcome them. The United Mineworkers of America (UMWA) members, on strike for 8 months now for fair benefits, wages, and safe working conditions, marched in the streets to the headquarters of BlackRock, the world’s largest asset manager and Warrior Met's biggest shareholder.

As Warrior Met was looking to emerge from bankruptcy in 2016, these miners took pay and benefit cuts in order to save the company. That collective-bargaining agreement ended April 1. Now that the company is once again making huge profits, Warrior Met has been ignoring their workers’ plight while doling out millions of dollars in fees to Wall Street and paying bonuses to upper management.

Six of the protestors, including UMWA President Cecil Roberts, were arrested by the NYPD for civil disobedience when they sat down in the street in front of BlackRock after the rally and refused to leave. Read and watch coverage of the protest from CNN, AL.com, and USAToday, and in case you missed it, click here for Kim Kelly's report on how Warrior Met is pouring money into a coordinated smear campaign and using court orders to try and kill the strike. You can also check out more photos from the march and rally on the CLC's Facebook page.