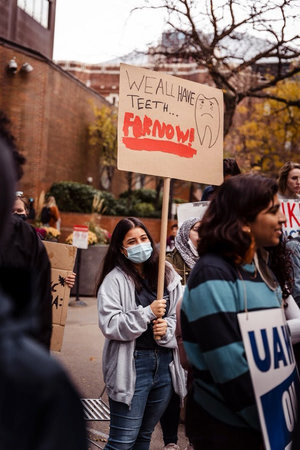 Columbia student workers are still on strike in what is currently the largest such action in the country. Three thousand workers, including undergraduate and graduate teaching and research assistants at Columbia University, are now in the fourth week of their strike. (Photo by @jeremychiuu via @SW_Columbia)
On Monday, the union and the University entered mediation, negotiating contract demands via a third-party arbitrator. However, unlike the earlier strike in Spring 2021 when the Union’s Bargaining Committee agreed to pause the strike to enter mediation, the current strike will continue even as mediation gets underway.

The workers, members of UAW Local 2110, are fighting for demands including arbitration for discrimination and harassment claims, higher compensation levels, and improved healthcare covering vision and dental care. While graduate student workers at Columbia are paid $5,500 to $18,000 below an annual living wage in NYC, Columbia's endowment earned 32.3 percent returns for the fiscal year of 2021, eclipsing both the 5.5 percent returns realized in fiscal year 2020 and the 9.9 percent 10-year returns — resulting in a total endowment value of $14.35 billion. Check out a new video about the strike from More Perfect Union here, read about the strike in Teen Vogue, and donate to the Hardship Fund for Student Workers here.