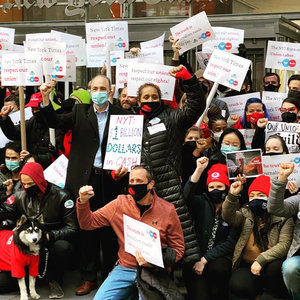 Members of three New York Times bargaining units joined forces along with supporters including the NYC CLC on Tuesday to deliver a message to management: Stop union busting. Respect our union.

Protesting outside the New York Times building, Wirecutter Union member Sarah Kobos said workers at Wirecutter, the Times-owned product review website, are ready to strike. The union has organized a work stoppage set to begin on Black Friday and continue through Cyber Monday, the website's busiest and most profitable period. They’re calling on supporters to honor their “digital picket line” and stop shopping through Wirecutter if a deal isn’t reached before then.

The Times is sitting on about $1 billion in cash but has offered Wirecutter staff guaranteed annual raises of just 0.5%. Meanwhile, Times management is also slow-walking bargaining with the Times Guild, and trying to block Times tech workers from holding a fair election for their union.

“Every single person here who makes the Times what it is deserves representation,” said NewsGuild of New York President Susan DeCarava. “They deserve fair wages. They deserve a newsroom and workplace that is safe and healthy and strong and runs according to the values that we all represent.” Click here to read more, and click here to sign up for updates from the union!