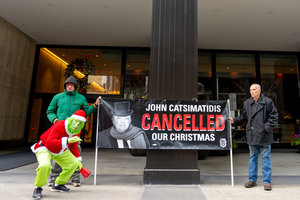 New York oil workers on strike for equal pay rallied with union supporters outside John Catsimatidis’ Midtown office on Wednesday, saying the billionaire’s union busting has ruined Christmas for their families. Immigrant workers from the Catsimatidis-owned United Metro Energy Corp. (UMEC) provided gasoline, diesel, and heating oil to New York throughout the pandemic, while Catsimatidis paid them wages as much as 50% lower than at other city oil companies. They have been on strike for nearly eight months, since April 19th.

“For years we’ve been paid way less than other workers doing the same job in this industry and when we went on strike, he fired us,” said Andre Soleyn, an oil terminal operator at United Metro Energy Corp. “It’s the holiday season and our families are going without because John Catsimatidis is putting his profits ahead of New York’s working families.”