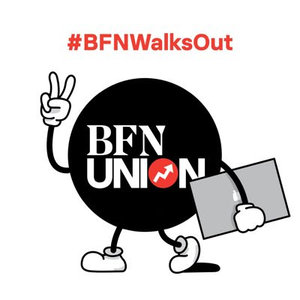 The BuzzFeed News Union has been bargaining its first contract for almost 2 years, but BuzzFeed still won't budge on critical issues like wages — all while preparing to go public and make executives even richer. So on Thursday, BuzzFeed workers, members of NewsGuild of NY, walked off the job for the day to demand that Buzzfeed get serious about a fair contract with adequate pay raises, affordable health care, a sensible outside work policy, and reasonable discipline standards.

BuzzFeed management has only offered 1% guaranteed raises per year, and they won’t budge on their proposed $50,000 salary floor. That’s not enough to live on in the cities where Buzzfeed has newsrooms, let alone enough to truly attract diverse talent. BuzzFeed has also dug in on a policy regulating outside work that’s more onerous than the status quo. It would require approval for any outside "content" work, meaning that members could not write a personal Medium post about their life or even do a makeup tutorial on TikTok. Workers are also demanding language that ensures union members won’t be disciplined over traffic or revenue metrics, which are outside of an individual's control and shouldn't motivate their work. Read more in The New York Times, and follow the Buzzfeed News Union on Twitter!