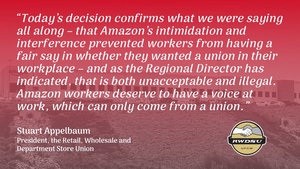 On Monday, the Director of Region 10 of the National Labor Relations Board (NLRB) formally issued a Decision and Direction of a Second Election, granting workers at Amazon in Bessemer, Alabama a new election based on the Retail, Wholesale and Department Store Union’s (RWDSU) objections to Amazon’s conduct during the union election conducted in the Spring of 2021.

“Today’s decision confirms what we were saying all along — that Amazon’s intimidation and interference prevented workers from having a fair say in whether they wanted a union in their workplace — and as the Regional Director has indicated, that is both unacceptable and illegal," said Stuart Appelbaum, President of the Retail, Wholesale and Department Store Union (RWDSU). "Amazon workers deserve to have a voice at work, which can only come from a union.”

The RWDSU charged Amazon with illegal misconduct during the union vote in Bessemer, Alabama. In August, the Hearing Officer who presided over the case determined that Amazon violated labor law; and recommended that the Regional Director set aside the results of the election and direct a second election. The date and method of the new election are yet to be determined. Read more in the NY Times, Washington Post, ABC News and CNET.