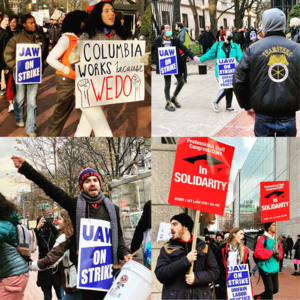 Columbia student workers are still on strike in what is currently the largest such action in the country. Three thousand workers, including undergraduate and graduate teaching and research assistants at Columbia University, are now in the sixth week of their strike.

On Wednesday, workers and their allies from across the city reported to picket lines and shut down the Columbia campus following retaliatory threats from the school's administration. Read coverage of the threats of retaliation actions by Columbia along how the workers responded in the New York Times and The Guardian.

The members of UAW Local 2110 are fighting for demands including arbitration for discrimination and harassment claims, higher compensation levels, and improved healthcare covering vision and dental care. While graduate student workers at Columbia are paid $5,500 to $18,000 below an annual living wage in NYC, Columbia's endowment earned 32.3 percent returns for the fiscal year of 2021, eclipsing both the 5.5 percent returns realized in fiscal year 2020 and the 9.9 percent 10-year returns — resulting in a total endowment value of $14.35 billion. Follow the Student Workers of Columbia on Twitter for more updates, and donate to the Hardship Fund for Student Workers here.