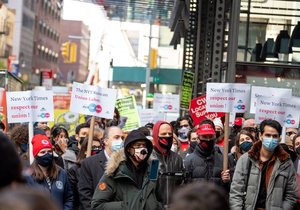 Workers at Wirecutter announced Tuesday that after two years of bargaining and a five-day strike, they have reached an agreement with the New York Times on a first contract.

Union members won immediate average wage increases of approximately $5,000, with the lowest paid members receiving a raise of more than 18%. They also won minimum increases of 2.5% per year for those in lower pay bands and 2% for those in higher bands.

Negotiations came to a head when staffers went on strike from Black Friday through Cyber Monday, the site’s most profitable period of the year. The unit represents workers at the popular product review site owned by the Times and is part of The NewsGuild of New York Local 31003.

“The huge gains we made in the past two weeks would not have been possible without our five-day strike with 100% participation and the thousands of supporters who honored our picket line and donated to our strike fund,” workers said in the announcement.

Nick Guy, a senior staff writer, said “For two years, we fought for wages and benefits that match the value we bring to Wirecutter and the New York Times, we fought for policies that are fair and equitable, and for improvements to our working conditions that allow us to find and retain the most talented journalists… I couldn’t be prouder to stand alongside my coworkers as we ratify this contract.” Read more here!