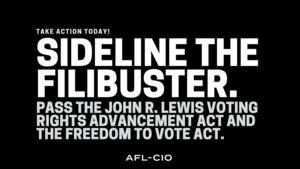 "One year ago today, we watched in horror as a violent mob, many carrying banners proclaiming white supremacy and anti-government slogans, attempted to block the peaceful transfer of power by storming the U.S. Capitol," said AFL-CIO President Liz Shuler on Thursday, the anniversary of the January 6th attack. "On that day, so many of us felt powerless watching the violence unfold. But we are not powerless, and the lesson of the Jan. 6 attack cannot be forgotten. Congress must pass the John Lewis Voting Rights Act of 2021 and the Freedom To Vote Act to protect the right of every American to cast our vote and have that vote counted so that every eligible voter has a say in who represents them."

It shouldn’t be this hard to pass laws that help people. It should be a simple 50-vote majority, but an outdated procedure in the U.S. Senate called the filibuster is stopping us. The choice is clear: Sideline the filibuster, not the hopes, aspirations and representation of America’s people. Click here to sign the AFL-CIO's pledge saying you’ll protect voting rights!