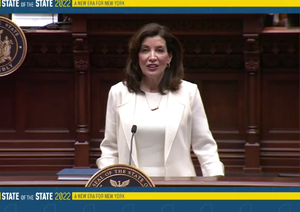 In Governor Hochul’s State of the State this week, she signaled important steps forward on climate action that creates good union jobs, including significant investment in the offshore wind supply chain, movement toward necessary transmission upgrades, and much-needed investments in schools.

We applaud these important steps forward and look forward to working with the Hochul administration in the budget process and beyond to ensure that these investments in climate action both reduce emissions and create good union jobs and careers for New Yorkers and their communities. Commitments announced in conjunction with Governor Hochul’s address included:

“We are encouraged to see today’s announcements on climate and jobs from Governor Hochul, which signal that the Governor is serious about meeting the State’s emissions-reduction goals, upgrading our infrastructure, and creating a clean-energy economy that works for everyone," said NYC CLC President and Climate Jobs NY Director Vincent Alvarez. "We look forward to working with the Governor and her team to make sure the State’s investments in clean energy include strong labor standards and create the kind of good union jobs New Yorkers and our communities need.” Read more here!