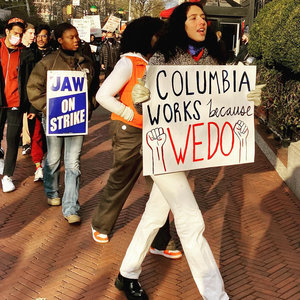 After ten long weeks on strike, in what became the largest labor action in the country, student workers at Columbia University have reached a tentative contract with the university that grants many of their demands for higher pay, better healthcare and stronger legal protections. A full union vote on the new four-year contract will take place later this month and if approved, the contract would go into effect immediately and be retroactive to August 1st.

"This is a historic moment for labor in higher ed, and it is just the beginning," the union said on Twitter. "We look forward to getting back to work and compensation for our back work."

In the meantime, members are thousands of dollars in debt from the strike and need immediate support to pay late fees, rent, and bills. Donate to their hardship fund here and follow the union on Twitter for more updates!