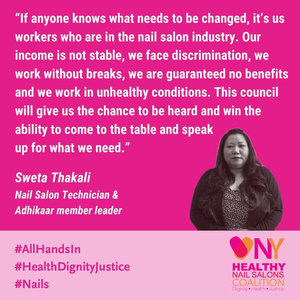 Nail salon workers and their allies in the New York Healthy Nail Salons Coalition this week joined New York State Senator Jessica Ramos and Assemblymember Harry Bronson in introducing the Nail Salon Minimum Standards Council Act. The first of its kind in the United States, the legislation would create a nail salon industry council made up of workers, employers, and government officials. The council will have broad powers to establish new workplace standards for all nail salons in New York, including on issues such as wages, scheduling, paid time off, and training. After completion of investigations, hearings, and consultation with experts, the council would submit a report with final recommendations for minimum standards to the New York State Labor Commissioner.

"For too long, the nail salon industry has been caught in a tragic race to the bottom where health and safety regulations are routinely ignored and nearly 80 percent of workers experience wage theft. And the pandemic has only emphasized those dangers, "said Julie Kelly, President of Workers United NY/NJ Regional Joint Board. "It will take workers, salon owners and New York State coming together to make NY’s nail salon industry safer, more just, and a model for the rest of the country. We can't use old-fashioned solutions to address 2022 problems. We need innovative approaches that bring worker voices to the table and put the industry on a path towards long-term success and sustainability. The Nail Salon Minimum Standards Council Act will raise standards across the industry and allow both workers and business to thrive." Read more here.